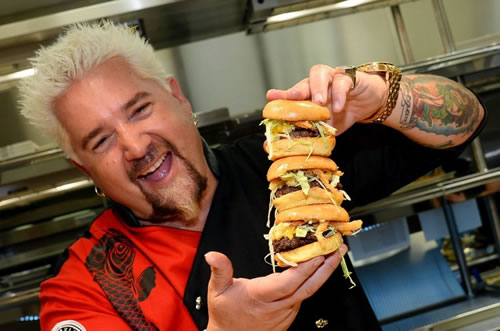 I love watching Food Network.  Diners, Drive-ins, and Dives was my first love and it’s really neat to see places near where I live being featured on the show.  I have been to a few, and have more on my bucket list (feedbag list?) as well.

Chopped is my jam and all-time favorite show, Cutthroat Kitchen is hilarious, and Guy’s Grocery Games seems like something a normal dunce like myself could almost handle competing in.  Iron Chef is full of amazing cooks making absolutely NOTHING I’d ever eat because of my picky eating…but it looks great on a plate!

When it comes to the competition shows, though…the Chopped/GGG/Cutthroat Kitchen type variety, I think there are some similarities in the episodes.  I feel like many of the chefs that appear on these shows all fall into certain archetypes.  Let’s see if we can identify a few, shall we?

Here are Five Cookie Cutter Chefs, in no particular order.

The Private chef from Los Angeles

He/she is usually a conceited ass who thinks far too much of themselves.  Their plating is always superbly refined, their dishes are always overly complicated, and they cannot complete a sentence without slipping something exotic-sounding in like “gastrique” or “fumet.”  They either blow the competition out of the water and I hate their stuck-up selves for it, or their hubris causes them to botch something critical and I am vindicated.  The judges put ’em in their place, and the exit interview is almost like a “You can’t fire me, I quit!” outburst.  They are, for me, the villain of the episode.

These are the coin-flip contestant.  They either stick to their guns, working within their wheelhouse each round and succeed through the creation of brilliant dishes using names of dishes I’ve never heard of…or they get thrown for a loop by some ingredient they’ve never worked with before, or decide to use the Ice Cream machine in the dessert round and royally boof their chances.  More on Ice cream in just a moment…

Pro Tip:
If you’re playing a drinking game while watching, “Bok Choy” is the word/food that should for-sure get you fershnickered if there’s an Asian Fusion chef in the competition.

So the running joke is that you can depend on McDonalds’ ice cream machine to always be broken.  I think you can also depend on there being an Ice Cream Woman/Man in most of the competitions.  Seems like every other episode, someone is scrambling over to the ice cream machine, pouring their steaming-hot concoction into the funnel and the judges go nuts.
“That’s a brave move, putting that poblano-bratwurst-rutabaga puree into the ice cream machine!” or “I wonder if Mr. Freeze knows that a 1-to-1 mixture of bourbon and milk isn’t going to set up properly no matter how much time they have.”
I love the Ice Cream Man episodes, because there’s always that Schrödinger’s Cat moment where they put the bowl under the dispenser and pull the handle.  Either it comes out perfect and the judges get all complimenty, or it’s a tepid mess where they talk about how they “feel for them,” but you can practically smell the blood in the water as the shark-judges circle their wounded prey.

Food Truck Dude is actually a split category.  He’s either the hipster man-bun wearing sort that uses avocados in literally everything, or he is a more culinarily (is that a word?  It should be a word) more evolved version of me; a Paleo-and-PBR Meatatarian that uses the phrase “nice sear” whenever he’s referring to the protein he’s cooking.
The Hipster will usually have one of two reactions when the secret ingredient is revealed; Confidence if the secret ingredient is a fish, or will pull a White Girl “Can’t Even” face if it’s red meat.
The Grillmaster will hyper-focus on the meat and will rarely be able to resist the urge to grill every vegetable that crosses his butcher block.  His natural enemy is the Dessert round.

This is a separate, distinct category from Food Truck Dude, and I absolutely LOVE these chicks.  They’re always badass, determined, and rarely crack under pressure.  It doesn’t matter if she specializes in Italian, Mexican, Asian, or “Murican” style…she adapts to the surprise ingredients and absolutely obliterates the competition that round.  Those times where she doesn’t, it’s tough to watch because all of that determination boils over and although she takes being eliminated well…like, better than I would for sure…it’s still a heartbreaker.

I have some other Chef archetypes in mind, but I’ll save those for another time.

View all posts by Tripp Allen